Photo: Santa Claus carries a bag of candy and a cane as children rush him upon his entrance to the Salvation Army’s Harrington Hope Center two weeks ago. (Photo by Mike Haynes)
Posted by Mike Haynes at 11:37 AM 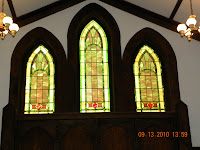 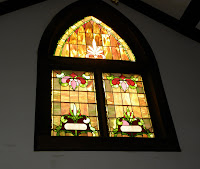 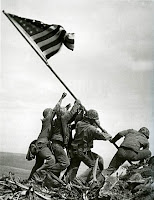 Beliefs inspired wartime heroes
Posted by Mike Haynes at 12:18 AM 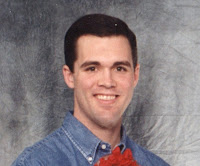 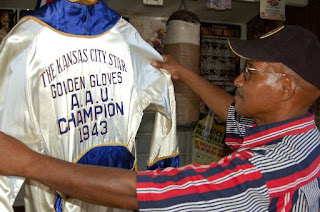 July 24, 2010, column:
There's added punch to these two stories
Photo: The Rev. Rupert Brashears admires a robe that followed him from Kansas City to Amarillo and gives him great satisfaction. (Photo by Mike Haynes)
Posted by Mike Haynes at 2:06 PM 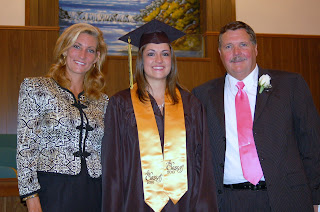 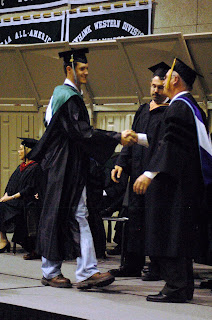 Hats off to grads, a source of pride

In the two photos, John Haynes of McLean, left, shakes hands with Dr. Duane Dunn, president of Seward County Community College in Liberal, Kan., after receiving his diploma May 8, and McLean graduate Sheri Haynes poses with her parents, Ginger and David Haynes, May 28.
Posted by Mike Haynes at 6:27 PM 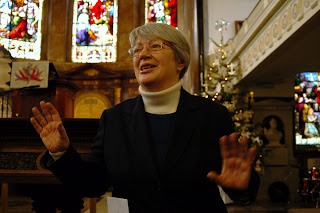 Trip brings me to home of hero of faith
Thea Scott leads a tour of Wesley's Chapel in London on Jan. 3. The chapel opened in 1778, and John Wesley preached there for 13 years. (Photo by Mike Haynes)
Posted by Mike Haynes at 9:52 PM

March 20, 2010, column:
McLean bonds on Lady Tigers' tournament run
(This column goes in a different direction about McLean basketball than the "just the facts" report below. --Mike H.)
Posted by Mike Haynes at 2:57 PM 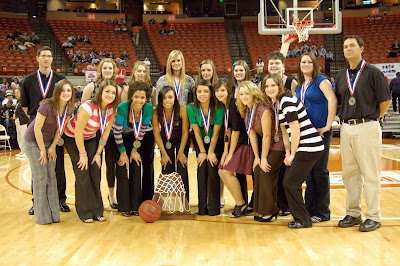 Below is my report of my hometown girls' basketball team at the state tournament last week. It appeared in The McLean News. In the picture, our niece is second from left in the front row! --Mike H.
By Mike Haynes
With a fourth of the town following them to Austin, the McLean Lady Tigers came up one game short of a state championship Saturday but still took home a second-place trophy for only the second time in 59 years.
Two Lady Tigers – seniors Sheri Haynes and Alexis Menefield – were named to the Class 1A Division II all-tournament team. Haynes led the team in scoring in both games at the Frank Erwin Center, and Menefield was McLean’s second-leading scorer.
McLean’s Saber Bohlar hit a three-pointer with 1.3 seconds left on the clock in the state semifinal game against Leggett Friday night to give the Lady Tigers a 66-63, come-from-behind win over the Lady Pirates from East Texas. The McLean fans in one corner of the “Super Drum” arena waved gold “McLean” towels and almost raised the roof of the “Drum” with their cheers.
Leggett had held a 17-point lead in the first half.
McLean never got on track in the state final game Saturday night and lost to Neches, also an East Texas team, 61-32. Haynes led the Lady Tigers in both games with 22 against Leggett and 12 against Neches.
Other McLean players scoring against Leggett were Menefield with 16, Nancy Castillo with 14, Bohlar with 10, and Rudy Rodriguez with 4.
Against the Neches Lady Tigers, Menefield had 11 points, Castillo had 7 and Rodriguez had 4.
In the semifinal game, Leggett led 23-11 after one quarter and 35-27 at the half. McLean had taken a 50-48 lead going into the final quarter but fell behind 60-55 with 4:08 left before making another scoring surge.
As one of the top two Class 1A Division II teams in the state, McLean duplicated the efforts of the 1951 team, which fell in the finals to Comanche, 50-49, in the first UIL girls state tournament. This year’s Lady Tigers finished with a 29-5 record.
About a fourth of McLean’s population, an estimated 230 fans, joined the team at the state tournament. The city’s population is 828. Enrollment at McLean High School this year is 76 students. In addition to players’ family members and McLean residents, many MHS graduates from past years and even former McLean coaches attended from the Dallas and Austin areas and from as far away as Arizona.
After the state championship game Friday night, McLean followers remained in the Erwin Center until halftime of the Class 5A title game, when the McLean and Neches players were honored. On the University of Texas court, head coach Benji Hausen, assistant coach Andy Glass and the Lady Tigers received the state runnerup trophy draped with a net from the game and also were presented with a game ball.
The team and coaches returned to McLean Sunday in the school district’s brand-new “McLean Tigers” bus.
Posted by Mike Haynes at 8:22 AM

Feb. 27, 2010, column:
Author urges Christians to spread ideas from Scripture
Posted by Mike Haynes at 10:26 AM 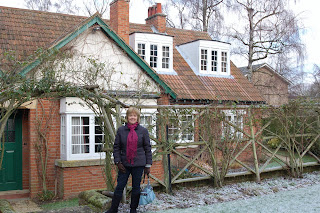