By Mike Haynes
One of the good things about Alister McGrath is that a couple of West Texans can understand the Oxford professor’s British accent. Another is that despite the fact McGrath has three doctorates – in molecular biophysics, theology and intellectual history – from Oxford, most of his lecture in Houston last month didn’t fly over the heads of me or my wife, Kathy.
The best takeaway from his presentation at Lanier Theological Library, however, was the content. McGrath offered a convincing defense of the concept that there is a God. His topic was “The Big Questions: Richard Dawkins vs. C.S. Lewis on the Meaning of Life.”
Dawkins, also an Oxford scholar and author of “The God Delusion,” wasn’t there and Lewis,
another Oxford and Cambridge scholar and author of many Christian books, died in 1963. But McGrath has debated the atheist Dawkins in person, and host Mark Lanier called McGrath “the leading authority on C.S. Lewis in the world alive today.”

I can offer only a small chip from the topic’s iceberg here, but I urge readers to watch the lecture video, which should be at www.laniertheologicallibrary.org before this month is over. An excellent video of a panel discussion involving Lanier, McGrath, two Lipscomb University professors and a Rice University astrobiologist already is online there.
Like Lewis, McGrath was an atheist himself before changing his mind after arriving at Oxford.  “Lewis became a Christian because of his perception that it offered a better explanation of things than his atheism,” McGrath said. “Actually, that’s my story as well. 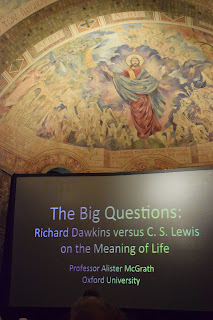 “Dawkins takes the view that you can only believe what can be proven by reason or by science. He even says faith is a kind of mental illness. He is convinced there is something wrong with people who believe in God.”
McGrath said Lewis, on the other hand, realized that “most of the really important things in life lie beyond rational or scientific proof” but are not irrational or unscientific.
Evidence always is subject to interpretation, McGrath pointed out. “There are many cases where scientific evidence allows several outcomes,” he said. “Science changes, not because it’s irrational but because of this constant process of checking things out.
“A hundred years ago, scientists had a radically different view of the origin of the universe than they do now.” McGrath said that then, a sudden beginning of the universe was considered nonsense. Now, most scientists believe in “the big bang,” a theory with which he said atheists initially weren’t comfortable.  “Science is provisional,” he said. “And it hasn’t reached its end.”
Dawkins believes everything has a scientific explanation; McGrath said Lewis asked whether science is just “part of the picture.” McGrath used an analogy suggested by Frank Rhodes, a geology professor and former Cornell University president:
“Imagine a kettle boiling. Why is the kettle boiling? Because there is energy being supplied, which raises the water temperature to its boiling point.” But he said there is another reason the kettle is boiling. “I wanted to make myself a pot of tea.”
“Does the fact that explanation one is right mean that explanation two is wrong?” McGrath asked. “No! Does the fact that explanation two is right mean that explanation one is wrong? No!
“The two explanations go together to lead to a bigger, a more reliable picture of what is actually going on. Science is part of the bigger picture, but it’s not all of the picture. They are two different answers, but answers that are complementary and not competitive.
“We don’t want to just know how things work; we want to know what they mean. Science helps us, but there are deeper questions that science cannot answer.”
McGrath said Christianity explains meaning, values and the difference in good and bad, while atheism is at a loss in those areas. Lewis was effective in showing the richness of faith, he said.
“Lewis was able to offer this imaginative vision of Christianity,” he said. “By which I do not mean a made-up vision; I mean the real thing with its rich, imaginative potential, fully explained and illustrated in stories like “The Chronicles of Narnia,” which captures people’s imagination.”
McGrath recalled Lewis’ sermon, “The Weight of Glory,” delivered at Oxford in 1941: “He says, ‘Look, our culture is spellbound by the idea that there is this world and there is nothing else. How do we break that spell? We’ve got to cast an even better spell; we’ve got to tell an even better story and show that we’ve got something to say that both captures the imagination and makes sense.”
Posted by Mike Haynes at 4:25 PM
Newer Posts Older Posts Home
Subscribe to: Posts (Atom)