By Mike Haynes
Professor Thomas Jackson was an odd man. If, in a social setting, a person used the figure of speech, “you know,” he would interrupt the speaker to point out that he didn’t know.
If someone said they wished the rain would stop, he would reply, “Yes, if the Maker of the weather thinks it best.”
While teaching what we would call physics today, he rarely explained concepts to his Virginia Military Institute students in the 1850s but simply repeated the words of the textbook, which he had memorized.
Jackson’s students would walk behind him, mimicking his gait, and draw pictures of his large boots on the blackboard. He was more effective outdoors teaching artillery, but cadets still imitated his high-pitched voice and removed linchpins from a cannon so its wheels would fall off.
Through it all, the peculiar professor stayed stiff and dignified.
His students probably didn’t realize that their teacher had shown bravery and decisiveness as an artillery captain in the Mexican War in the 1840s. But Confederate leaders remembered when the Civil War began in 1861.
Author S.C. “Sam” Gwynne examined this soldier-turned-professor-turned-general in his 2014 biography, “Rebel Yell,” the story of the man who became known as Stonewall Jackson and was admired not only by everyone in the South, but by many in the North. 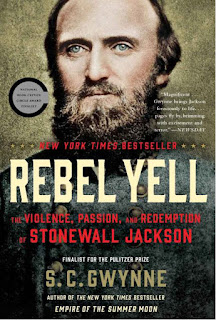 Gwynne has spoken in the Texas Panhandle about his award-winning book, “Empire of the Summer Moon,” a chronicle of Quanah Parker and the Comanche tribe. In Pampa in 2015, my wife had Gwynne sign a copy of “Rebel Yell” for me. I finally got around to reading it.
As Jackson’s weather comment hints, he was a devout Christian who Gwynne says might have become a Presbyterian minister if his speaking ability hadn’t been so dismal. But while on the VMI faculty and during his two years as a military commander, his faith was obvious.
Jackson’s skill in maneuvering troops quickly brought promotions as he helped defend his native Virginia from what most Southerners perceived as the Northern invaders. He pushed his infantry to move so fast that they often outflanked the enemy and showed up to surprise opposing generals.
And always, Jackson shunned credit, which he unashamedly gave to God. In an era when President Lincoln claimed divine favor for the Union, Jackson did the same for the Confederacy. This report to Robert E. Lee before an 1862 battle is typical:
“Through God’s blessing, the advance, which commenced this evening, has been successful thus far, and I look to Him for complete success to-morrow.” The next day, Jackson’s forces took Harper’s Ferry.
With several battlefield victories, the “Stonewall” nickname became common in northern and southern newspapers. Jackson avoided reading his accolades. In a letter to his wife, Anna, he wrote:
“Don’t trouble yourself about representations that are made of your husband. These things are earthly and transitory. There are real and glorious blessings, I trust, in reserve for us beyond this life.
“It is best for us to keep our eyes fixed upon the throne of God and the realities of a more glorious existence beyond the verge of time.”
He told his brother-in-law, “The manner in which the press, the army and the people seem to lean upon certain persons is positively frightful. They are forgetting God in the instruments He has chosen. It fills me with alarm.” To his pastor, he wrote, “if we fail to trust in God & give him all the glory, our cause is ruined.”
Several times, Jackson was seen on the battlefield praying astride his horse, Little Sorrel, or standing near his troops. His head would bow, and his right hand would rise into the air.
During long periods in camp, he arranged for chaplains or visiting ministers to preach to the soldiers, often at his own expense. He and Lee visited church services when possible, but the shy Jackson found that his fame made that troubling. At the end of a service in Richmond, the congregation realized Stonewall was in attendance. Amid excitement, many rushed Jackson’s pew, and his officers had to help him escape the attention.
Before one military decision, another general commented, “Don’t you know why Old Jack would not decide at once? He is going to pray over it first!”
Of course, today it isn’t socially or politically OK to say good things about anyone associated with the Confederacy. Jackson did own six slaves, and he fought for the side that defended slavery. Some may not forgive that.
He also, in 1855, had financed a Sunday school for African Americans, which was against the law. Local leaders confronted him about it, but Jackson was adamant that the school continue. His wife said, “His interest in that race was simply because they had souls to save.”
Up to 100 slaves attended the Lexington Colored Sabbath School. In 1905, the Rev. L.L. Downing had a stained-glass window honoring Jackson installed in a black church in Roanoke, Virginia, because Jackson had taught Downing’s enslaved parents to read, write and love the Bible.
Stonewall Jackson’s brilliant war career was short. In 1863, he was shot by friendly fire, had his arm amputated and died of pneumonia at age 39. His personal servant, Jim Lewis, was devastated, as was much of the South. Author Gwynne said his funeral was the largest public display of grief in U.S. history to that point.
Thomas Jackson’s last words were reported as “Let us cross over the river and rest under the shade of the trees.”