By Mike Haynes
When people find out I’m a Beatles fan, they often ask which is my favorite song by the greatest band in history. Although on any given day I could pick a different one, I always reply, “I Saw Her Standing There,” because it’s fun, energetic rock ’n’ roll and because for me, the “Her” is my wife, Kathy.
Nobody has asked who my most admired Christians are, but I do have a short list. There could be many more, but my Fab Three are Billy Graham, John Wesley and C.S. Lewis, now all in heaven forever with the only one really worthy of praise.
In his almost 65 years on Earth, Lewis preached only a few sermons. His interaction with people in person was limited pretty much to those he encountered in his career as an Oxford and Cambridge professor. The British intellectual didn’t reach millions in stadiums and on television like Graham, and he didn’t start a new Christian movement like Wesley. 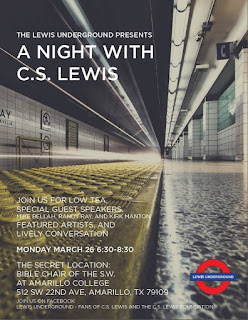 But man, you could argue that his impact for God was right up there with anyone. Before and after his 1963 death, more than 120 million copies of his “Chronicles of Narnia” children’s books, which have a definite Christian theme, have been sold, according to the Steve Laube publishing agency. That number doesn’t include millions more of his overtly Christian books such as “Mere Christianity” and “The Screwtape Letters,” his science fiction novels or his scholarly writing on literature.
Lewis is exceptional in that his arguments for the Christian faith and his subtle promotion of it in multiple writing genres appeal to all kinds of Christians, including evangelicals, Catholics and mainstream Protestants.
So it isn’t surprising that even Amarillo, Texas, has at least one group that meets monthly to discuss his books, his life and his ideas.


The Lewis Underground meets at 5:30 p.m. the fourth Monday of each month, usually in the clubhouse of the River Falls Apartments. It’s associated informally with the C.S. Lewis Foundation, based in Redlands, California, established in 1986. The foundation owns the Kilns, Lewis’ home in Oxford, England, which hosts visiting scholars and seminars, and stages regular Christian events.
The Underground and the foundation don’t worship Lewis. Here’s a statement that both groups follow: “Inspired by the life and legacy of C.S. Lewis, the vision of the C.S. Lewis Foundation is to restore a vital Christian presence throughout higher education, the arts and the culture at large.”
Many would agree that education, the arts and our culture all need a new infusion of Christian principles, and the local group is expanding its own presence by planning free public events.
The first will be at 6:30 p.m. Monday, March 26, at the Bible Chair of the Southwest at 512 SW 22nd Ave., across the street from Amarillo College. Although the organizers expect lots of college students to attend, the program will be of interest to anyone attracted to the ideas I’ve mentioned above.
Dr. Mike Bellah, retired from the AC English department, will talk briefly about the concepts of friendship in Lewis’ writings. Randy Ray, who teaches mass media at West Texas A&M University, will bring some WT students to talk about their 2017 study trip to Oxford and Lewis’ stomping grounds. And Kirk Manton, a Trinity Fellowship staffer and a CSL Foundation regional representative, will talk about the foundation and its activities.
On the arts front, Amarillo’s Randy Palmer will play and sing, and graphic artist Cody Watson will show his recent work. Local writer Nan Rinella will offer “low tea” in the form of English tea and scones.
In “Mere Christianity,” Lewis called the world “enemy-occupied territory.” “Christianity is the story of how the rightful king has landed, you might say landed in disguise,” he wrote, “and is calling us all to take part in a great campaign of sabotage.”
The Lewis Underground, with its March 26 event and its monthly meetings, seeks to participate in that spiritual mission.