By Mike Haynes
Listening to oldies radio in the car, Kathy and I saw “Love Child – 1968” pop up on the dashboard display and heard the familiar voice of Diana Ross singing, “Love child, never meant to be, love child, by society, love child, always second best, love child, diff’rent from the rest.”
I told my wife that song would be unacceptable today with its theme of a woman who was born out of wedlock and doesn’t want to bring her own child into the world the same way:
“No child of mine’ll be bearing the name of shame I’ve been wearin’…”
Yes, with 40 percent of babies today born to unmarried mothers, it would be seen as
insensitive to imply that any woman should feel guilt or shame for having a child without a marriage license.
But it’s just one of the societal changes in recent decades that have many Christians worried that our culture is sliding down in the proverbial handbasket. In the wake of possibly the most jolting blow to traditional values, the U.S. Supreme Court’s endorsement of same-sex marriage, two writers have suggested how orthodox Christians should respond to the changes. 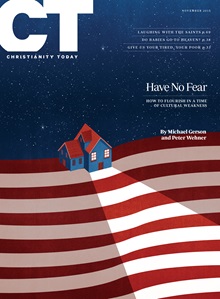 I use the word “orthodox” to indicate Christians who still hold an interpretation of the Bible that, midway through the 20    th century, most believers agreed upon: basic, traditional Christianity, the “Mere Christianity” that C.S. Lewis explained.
Michael Gerson and Peter Wehner, both newspaper columnists, wrote a cover story for the November “Christianity Today” magazine in which they admit that “By many accounts, orthodox Christians have lost the culture wars.” They describe three responses and endorse one they say can allow Christians to flourish “in a time of retreat.”
One reaction is the knee-jerk one we see on Facebook. Lots of committed Christians are vocal about issues where social conservatives have lost ground over several decades. Gerson and Wehner list several: divorce, abortion, cohabitation, out-of-wedlock births, gender roles and same-sex marriage.
While they don’t say Christians should retreat from the public square on every issue, they don’t believe a militant response will be helpful in the long run. They especially discourage too much emphasis on that recent court decision:
“Making gay marriage the centerpiece of Christian opposition would be foolish because it would overshadow all the other priorities of the church.” Instead, they urge a focus on building up traditional marriage. In their eyes, most Americans still support historical marriage, and allowing the small percentage of people practicing gay marriage to set the agenda is a mistake.
The writers say Christians should avoid being known primarily for defending their own institutions: “It would mean constantly fighting defensive battles on terrain chosen by others.”
A second option, promoted by author Rod Dreher, is for Christians to pretty much withdraw and operate within their closed communities. Dreher calls it the Benedict Option after Benedict of Nursia, who organized a monastic withdrawal from the decadent society of Rome.
Gerson and Wehner don’t think Christians should hide but become even more active – in a positive way. They call it the Wilberforce Option after William Wilberforce, the British activist who helped rid his country of the slave trade.
They define their option as “the relentless defense of human dignity in the course of human events.” They point out that for 2,000 years, Christians have lived in societies that didn’t reflect their values but that they nevertheless have had great influence. Paul didn’t write his first-century letters to try to influence political leaders but to advise church members on how to cope with day-to-day challenges in light of Christ’s teachings.
The Jews, Gerson and Wehner observe, always have been examples of how to be devoted to their beliefs but not expect everyone around them to share their values.
Christians shouldn’t always give in, the writers say, but should pick their battles. Of course, they declare, “religious liberty is vital.” But they believe Christians who oppose gay marriage might be more effective for God’s kingdom working on a food bank project with a same-sex couple than they would protesting that couple’s relationship.
The Wilberforce Option involves working with other Christians in areas of common ground.
Historically, Christianity has attracted seekers because of its compassion and love. Jesus said in Matthew 22, “Love the Lord your God with all your heart and with all your soul and with all your mind. This is the first and greatest commandment. And the second is like it: Love your neighbor as yourself.”
Gerson and Wehner put it like this:
“Rather than lecturing the world, we need to show a different and better way to live in the world.”
Posted by Mike Haynes at 2:58 PM
Newer Posts Older Posts Home
Subscribe to: Posts (Atom)