By Mike Haynes
When two pastors – one Methodist and one nondenominational – get together on one platform, both are going to have to do a little adjusting.
That’s what happened last Sunday when the young Casey Carter of One Way Church in McLean and the little-bit-older Thacker Haynes of the United Methodist churches in McLean and Heald preached one sermon like a ping-pong match, tossing words back and forth to each other but with all aimed at their combined congregations.
The joint service in the One Way sanctuary – it’s the biggest in town – drew 316 people in the community of less than 800, followed by a free barbecue dinner.
It usually takes a six-man football game to bring that many people together in eastern Gray County. This time, the focus was Jesus Christ.
The combined worship event was a logical affirmation of cooperative ministry that’s been going on for at least a couple of years. Carter and Haynes (full disclosure: my cousin) have worked together in a 12-step ministry, Bible studies, a Christmas kids’ gifts outreach, a rodeo ministry in Clarendon and a youth program that has brought 75 kindergarten through high school students from all three churches together weekly.
The pastors’ flocks have worked side by side in a small town where each church wouldn’t have as much impact separately.
“It’s about the only way for the Christian population to get anything done for the Kingdom in small rural towns,” Haynes said.
One accomplishment was 15 children who had professed Christ, several of whom were baptized after the joint sermon Sunday. In a little Panhandle town, that’s a lot. Carter, Haynes and layman Jeremiah Soto split the duties in the baptistry, built when the facility was First Baptist Church. Methodists usually sprinkle, but Haynes has handled plenty of immersions, too, in a pond near his house.
Such differences often keep Christians apart. Gene Shelburne, Amarillo’s longtime minister, Bible teacher and author who also writes for this and other newspapers, published a book in 2004 called, “The Quest for Unity: An Appeal for Oneness Among All Believers in Christ.”
Shelburne lists questions that drive wedges between Christians – some that seem to be 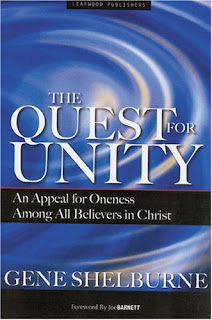 preferences, such as what to call the preacher, whether to raise hands in worship and whether to sing new songs or old songs.
He calls other questions “weightier” – such as whether to speak in tongues, what happens in the end times and whether salvation is by works or grace.
“Whole denominations have been created because Christians can’t agree on questions like these,” Shelburne writes.
The sermon by Carter and Haynes used the story in II Kings 4 about a woman whose husband has died, and she is at the mercy of creditors. The only item of value she has is a small jar of olive oil. The prophet Elisha tells her to ask all her neighbors for empty jars, then pour her olive oil into each of them.
The woman has faith in the prophet, and her few drops of oil fill all the vessels, giving her wealth enough to pay her bills.
The preachers last Sunday had asked members of all three churches to bring ceramic jars, which were displayed in front of the platform. They compared the neighbors in Kings 4 to the Christians who’ve been working in their youth and other ministries, regardless of church affiliation.
After the sermon, excerpts of Billy Graham messages were shown on two video screens, which was fitting because in addition to leading so many individuals to God, Graham also brought Christians of all kinds of churches together in worship and in ministry, especially in parachurch organizations.
In his book, Shelburne grants that “significant doctrinal issues divide Christ’s followers.” But he says that more often, “we allow ourselves to be estranged from each other in the Lord because we just don’t like the way the other person chooses to worship or evangelize. We don’t ‘do church’ the same.”
About 20 young boys and girls last Sunday clapped and sang, “When those gates are open wide, I’m gonna sit at Jesus’ side, I’m gonna sing, I’m gonna shout, ‘Praise the Lord!’”
Those smiling kids didn’t care which of the three churches they were from.