May 12, 2019, column:
Book explores characters' uncertainty and disillusionment with God


By Mike Haynes
When attending events of the international C.S. Lewis Foundation or the local Lewis Underground, Nan Rinella calls herself a hobbit among elves. Having been born in Hollywood and having worked as a flight attendant for 20 years, she has perceived herself as a simple, down-to-earth person like the diminutive hobbits in J.R.R. Tolkien’s world of Middle Earth as opposed to the more intellectual elves of Tolkien’s fantasy world. 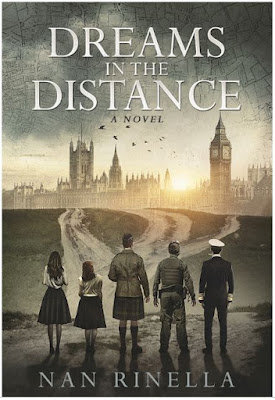 Rinella first read and fell in love with “The Lord of the Rings” in 1971 while her husband served in Vietnam. Years later, in 2004, having embarked on a second career as a journalist, she found herself at a conference called “The Fantastic Worlds of C.S. Lewis and J.R.R. Tolkien,” sponsored by the CSL Foundation. Five years later, she was directing an annual foundation retreat in Texas.
She still didn’t feel in the league of the academics she rubbed elbows with while discussing the works and lives of Lewis and Tolkien, the renowned British scholars and authors.
An entertaining and inspiring new book, however, has revealed that, pardon the pun, Rinella has been selling herself short.
“Dreams in the Distance” is her first work of fiction and the beginning of a series of novels called “The Choice.” Inspired by Lewis and Tolkien’s writings, it follows five main characters and the choices they face following World War II and beyond. In a sense, Rinella’s epic story begins where the last book of Lewis’ “Narnia” series leaves off.
Lewis’ character, Susan, in “The Last Battle,” inspired Rinella to create her character, Lily. (If you
haven’t read “The Last Battle,” note the spoiler coming up.)

“In preparation to attend my first C.S. Lewis Foundation conference in June 2004, I read all seven books of ‘The Chronicles of Narnia,’ said Rinella, who’s lived in Amarillo the past 28 years. “The question, ‘Whatever happened to Susan?’ haunted me. ‘What would happen to a young girl who lost her whole family in the actual London train crash of 1952, when Lewis was writing Book Seven?’
“Over the years I went down several rabbit holes and in 2011, the series, lasting 50 years, evolved featuring the five main characters.”
“Dreams in the Distance,” published this year, starts with three young people shocked by the first strikes of the German air blitz in 1940. The young Lily, daughter of a London minister; her best friend, Phila, daughter of a Royal Navy admiral; and Phila’s older brother, Hugh, later to become a Navy intelligence officer, find themselves coping with a blast on a London street – and a mysterious stranger who helps them into a subway shelter.
That scene propels readers into several plot lines, from the two girls’ introduction into London high society to Hugh’s job in the British embassy in Washington, D.C., to family tension as Lily’s interest in fashion design clashes with her father’s strict Christian devotion.
All the while, the characters hear “voices” in their minds seeking to direct them. What are these intrusive thoughts? Their consciences talking? Demons? A higher spirit?
Then there are Ollie, a tall, red-headed Scotsman injured in the war who has his first hint of love in a military hospital; and Dan, a cocky P-51 pilot from California whose Christian faith has waned and who faces disappointment after his injury in a dogfight over Germany.
The book explores all their reactions to tragedy, uncertainty and disillusionment with God as they navigate life in Britain and America. The emotions ring true, as do the settings, which are enriched from Rinella’s own travels, including visits to C.S. Lewis’ house in Oxford and a recent trip to Scotland.
And readers will enjoy what you might call cameo appearances in the novel by Lewis and Tolkien themselves as they interact briefly with some of the main characters.
The book “is a novel of love and war, faith and doubt, intellect and insight,” wrote Joy Jordan-Lake, an award-winning writer living near Nashville. “Throughout, author Nan Rinella displays her passion for history and literature and for the research that brings it together.”
The Christian influence of Tolkien and Lewis as well as Rinella’s own spirituality also permeate her imaginative story.
Rinella just wrapped up a book signing at ArtsFest at Amarillo’s Arts in the Sunset, but “Dreams in the Distance” is available at amazon.com and barnesandnoble.com.
I suggest giving the work of this self-described “hobbit in Narnia” a look.