Sept. 29, 2019, column:
'Country music' documentary covers sad songs, faith and everyday experiences
By Mike Haynes
Music can be powerful, and if you watched Ken Burns’ latest documentary, “Country Music,” on PBS the past two weeks, you saw – or more important, heard – several examples.
The fun songs – Bob Wills’ “Take Me Back to Tulsa” – and the fast songs – Flatt and Scruggs’ “Foggy Mountain Breakdown” – certainly can raise spirits. But musician Emmylou Harris said this: “For me, the sad songs are the best, because they make you feel better, because somehow, they connect you to the world, like we’re all in the same boat.”
Country music has plenty of sorrowful songs, many dealing with heartache, cheatin’ and alcohol. But some of the most moving moments in the Burns film series come in segments on lives that ended too soon and the hopeful music that followed.
Jimmie Rodgers, “the Father of Country Music” was 35 years old when he died in 1933 of tuberculosis. His music on the radio and on records had heartened many during the Depression, and crowds lined the railroad tracks as he was taken from New York City to his hometown of Meridian, Mississippi, for burial. Rodgers had just recorded a tune with the lyrics, “yodeling my way back home.”
He hadn’t been forgotten 20 years later, when 30,000 people attended a memorial in Meridian, including A.P., Maybelle and Sarah Carter of what could be called “the Founding Family of Country Music.”  The Carters’ song, “Will the Circle Be Unbroken,” still is a standby at memorial services with its ending:
“There’s a better home a-waiting, in the sky, Lord, in the sky.”
The documentary recalls that at Rodgers’ 1953 memorial, it had been said  that the country music mantle had been handed over to Hank Williams – who had died a few months earlier at age 29.
Much of Williams’ music reflected his life, made difficult by alcohol, two divorces and the drugs that apparently killed him. “I’m So Lonesome I Could Cry” is one example of why he was
called “the Hillbilly Shakespeare.” But his granddaughter pointed out that under his anguish was a definite faith in God and redemption that you can’t miss in “I Saw the Light.”

Williams wrote that song after he and his mother had been in a car approaching Montgomery, Alabama. Lilly Williams had remarked that she saw the light of the airport, indicating they were almost home. Son Hank turned it into:
“I wandered so aimless, life filled with sin, I wouldn’t let my dear savior in.
“Then Jesus came like a stranger in the night, Praise the Lord, I saw the light.”
After Williams died in the back seat of another car, country stars Roy Acuff, Red Foley, Carl Smith, Webb Pierce and others sang those lyrics at his funeral in Montgomery to 2,750 people while another 20,000 waited outside.
No secular music genre is more spiritual than country music. Maybe that’s because its roots are in the South, considered the Bible Belt, and in the hope that many songs offered during hard times. Burns’ series narrator said that “according to a song by the Carter family, the only place the Depression hadn’t reached was heaven.”
Of course, country music always has had another side. “In its infancy, country music came from the church with the Carter family and from beer joints with Jimmie Rodgers,” said bluegrass musician Vince Gill.
Patsy Cline’s melodic voice gave life mostly to jukebox, heartbreak songs such as “Walkin’ After Midnight,” “I Fall to Pieces” and Willie Nelson’s “Crazy.” Her fame wasn’t on the “church side” of country, but the Virginia native who crossed successfully over to the pop charts fit well into the tight-knit country “congregation” that was at home with faith. Her first singing experience had been in a Baptist choir, and she and her mother had sung at church socials.
Cline’s death at age 30 in a 1963 plane crash, along with singers Hawkshaw Hawkins, Cowboy Copas and her manager, Randy Hughes, again brought the country music family together, as shown in Burns’ series. Roger Miller, a native of Erick, Oklahoma, and later a recording star, was one of her friends who searched for the plane wreckage in Tennessee. The Grand Ole Opry hosted a memorial service in which many of the stars of the day participated.
The Opry venue itself, the Ryman Auditorium, was a fitting venue for such a service. It had been built in 1892 by Thomas Ryman, a riverboat owner who, according to Burns’ series, “had undergone a religious conversion and wanted a place he called ‘purely an outpost to catch sinners.’” As the Opry’s home from 1943 to 1974, the Ryman became known as “The Mother Church of Country Music.”
The 16 hours of PBS’ “Country Music” cover much more than sad songs and faith in God. But throughout, the series shows how this home-grown genre “reflects experiences of everyday Americans.”
And it shows that many can identify with these words from Roy Acuff’s 1936 “The Great Speckled Bird,” seen as a reference to the church:
“She is spreading her wings for a journey, She’s going to leave by and by,
“When the trumpet shall sound in the morning, She’ll rise and go up in the sky.” 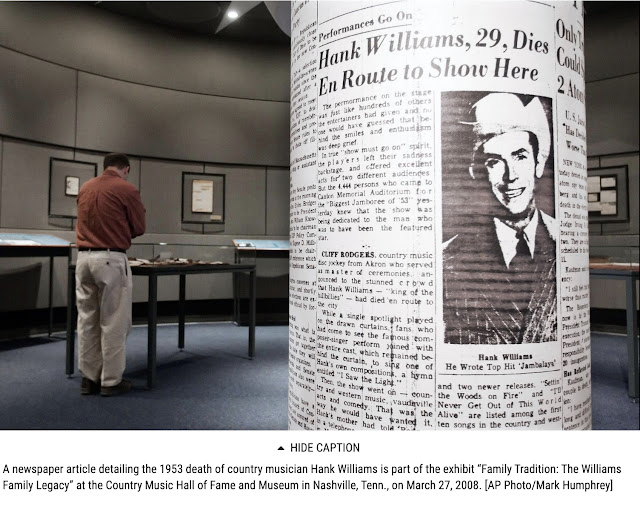