By Mike Haynes
Give me a break, Randy Ray!
Let’s see: What are some of the topics that have occupied my thoughts and reading for years? Texas Tech sports. The Alamo. My hometown, McLean. C.S. Lewis. The Beatles.
And what topics did Randy Ray choose for a class at West Texas A&M University and a follow-up trip next summer?
C.S. Lewis and the Beatles.
I should be teaching that class.
OK, Ray, who teaches audio and video production, media management and media history at WT, is the one who came up with the idea. And I’m really not mad at him; I’m thrilled that someone 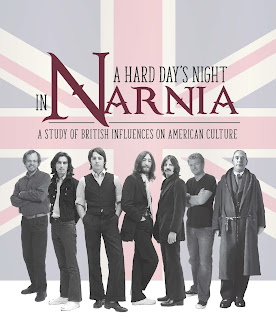 is taking seriously two of my main interests.

After first thinking, “What could an intellectual Christian writer and the most famous band in the world have in common?,” I believe it makes more sense than a lot of topics taught in colleges these days.
The title of the course – which Ray and history professor Dr. Marty Kuhlman will teach next spring, followed by a summer study abroad trip to England – is “A Hard Day’s Night in Narnia: A Study of British Influences on American Culture.”
At first glance, the only common denominator of Lewis and the Fab Four seems to be that both were British – John, Paul, George and Ringo from Liverpool and Lewis an Oxford and Cambridge scholar. And the Beatles took off just as Lewis left us. He died on Nov. 22, 1963, the same day as John F. Kennedy and Aldous Huxley. That was only a few weeks before the Ed Sullivan Show appearances that brought Beatlemania to America.
But both have had huge influences on U.S. popular (the Beatles) and spiritual (Lewis) culture.
“Even though they’re both very British, they’re very different,” Ray said. “I want to show the polar opposites of the different kinds of British influence that we’ve gotten.
“Lewis is unique in the way his writing is still so relevant more than 50 years after his death. I think it remains relevant because of the way he made deep thinking approachable to everyone.
“And without doubt, the Beatles influenced popular music culture more than any other artist ever has or probably ever will. Their influence shook the entire world.”
Although Lewis died at age 65 as the young Beatles were on the cusp of their global fame, the height of his popularity came after the 1960s reign of those purveyors of “yeah, yeah, yeah” and “Let It Be.” “Mere Christianity,” one of his most well-known adult books, and the “Chronicles of Narnia” children’s books were published in the 1950s, but it was a couple of decades later that a large number of Americans discovered them.
Lewis has had his largest impact on American evangelicals, but his adult Christian writing also is appreciated in mainstream Protestant churches as well as Catholic circles. Lewis himself attended Holy Trinity Church, an Anglican congregation a half mile from his Oxford home, the Kilns.
And the Narnia stories carried his influence into millions of American households. The Narnia movies that were hits from 2005 to 2010 expanded it.
Ray said he expects 20 to 30 students in the class. So far, most of them have expressed more interest in Lewis than the Beatles. His own fascination with Lewis’ writing began in Pampa when he came home from junior high and picked up a book that belonged to his mom and dad.
“Why do my parents have a book called ‘The Screwtape Letters’ written by some Oxford professor,” he recalled thinking.  “It was just so different. I also love the fact that with Lewis, just a little goes such a long ways. There is so much packed into every sentence. And I think that’s pretty rare in writing – to carry that much weight with every word.”
Ray isn’t as big a Beatles fan as I am, but he has played bass in bands for years. “In the music industry, you can’t not appreciate what the Beatles did,” he said. “They were a game-changer. You cannot have a music conversation with anyone without it eventually leading to the Beatles.
“And I don’t think you can go to any church in America without eventually hearing a C.S. Lewis quote. Anytime there’s anything out of the ordinary – the presidential election, 9-11 – people are throwing Lewis in there; what was his take on it?”
Students in the class have reason to be excited, because the July 17-23 trip will include a tour of Lewis’ longtime home; Magdalen College, where he taught in Oxford; and the Eagle and Child pub, where Lewis and his writing friends, the Inklings, met.
The trip also will hit the homes of Paul McCartney and John Lennon and the famed Cavern Club in Liverpool and Abbey Road Studios in London.
To paraphrase a little band from Liverpool, I know the students will be a lovely audience, and I hope they will enjoy the show.