By Mike Haynes
Count Alexander Rostov has grown up on a country estate in Russia, attending grand balls, visiting St. Petersburg in his family’s four-horse carriage and relaxing in the summer on the grass by the river. 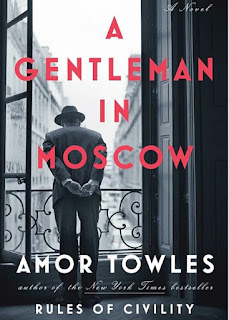 Then 1917 comes, the czar and his family are executed, and aristocrats not only are not in favor, they are in danger. The Bolsheviks who have taken over the huge country see people such as the Count as a drain on society and a threat to the revolution. Most of the Rostov family flees to other parts of Europe, but as the new government confiscates their estate, the Count moves into the upscale Metropol Hotel in Moscow, which the Communists have allowed to stay in business.
By 1922, Rostov’s upbringing comes to the attention of the authorities. A noble such as the Count could be sent to Siberia or even shot. But because he has written a poem in college that had a revolutionary theme, the 30-something gentleman receives a light sentence: house arrest for life in the Metropol.
That’s the premise of “A Gentleman in Moscow,” the bestselling 2016 novel by Amor Towles. As society is turned upside down and Russia becomes the USSR, the fictional count survives by adjusting. The elaborate suite he has enjoyed for four years is given to a government official, and he is escorted upstairs to a 100-square-foot room – his new quarters. He has to make split-second decisions on what few family heirlooms and pieces of furniture he can take with him.
The Count is resourceful. He discovers another unoccupied room that he can access through his closet, and he makes a sort of den out of it. He is free to roam the elegant hotel, and with no relatives in sight, the hotel staff becomes his family. The desk clerk and waiters treat him just as they did when he had rooms with floor-to-ceiling windows. He continues to eat gourmet food in the restaurant and choose the proper wine for it. But he can only watch from a window as people enter and exit the Bolshoi Ballet across the square.
The Count isn’t as content as he appears, but he gets through times of despair. A connoisseur of food, drink and manners, he becomes the head waiter of the still posh restaurant. Then, in his late 40s, he becomes the only person who can take care of a 6-year-old girl. He’s never had children, and he doesn’t know how to talk to her or where she can sleep. He figures it out. Through three decades, he adjusts and adjusts again.
Believe it or not, the Count reminds me of Grandad. John C. Haynes turned out to be quite adept at adjusting, too. As a young man, he had worked at a couple of banks. He ran a local oil company facility, then managed a ranch. In middle age, Grandad was in the middle of community activity in our small town: president of the Lions Club, on the board of the church and school board. He was elected mayor and effectively was head of economic development, securing a hospital for the town and traveling to places such as Florida to recruit workers for the local undergarment factory.
Then, like everyone, he suffered some losses. His wife, our Granny, died of cancer. His vision started to get bad, and he eventually lost most of his sight. Not needing the big house on the hill  anymore, he moved alone into a small one a few blocks away. Then a senior citizen, he joked that it was perfect because his new house was halfway between the nursing home and the cemetery.
Like the Count, Grandad had to have been discouraged. But to those around him, he usually was a jokester or a storyteller who made his 50-year-old reminiscences funny and interesting. No longer in charge of the city’s budget, he kept his remarkable math skills sharp by counting steps on his daily walks. He stayed busy by picking up discarded baling wire on the ranch or collecting tin cans to sell.
Before he moved to that nursing home and then to that cemetery, he made the most of life, taking the next step in front of him, wherever it led.
The apostle Paul told us that we can be content in any circumstances. Like the Count and like Grandad, Paul wrote, “I know what it is to be in need, and I know what it is to have plenty. I have learned the secret of being content in any and every situation, whether well fed or hungry, whether living in plenty or in want. I can do all this through him who gives me strength.” (Philippians 4:11-13, NIV)
When I taught at Amarillo College, I put a Teddy Roosevelt quote on my office door, hoping students who might be struggling would see it. The quote is simple:
“Do what you can, with what you have, where you are.”