By Mike Haynes
Various thoughts between Thanksgiving and Christmas, some weightier than others:
* * *
My family tried to keep Thanksgiving as close as possible to the way it’s been for many decades despite my mother’s death last Dec. 21. Last year, during Mom’s five-week hospital stay, the family had Thanksgiving dinner at Furr’s.
This year, back at the home place, we just carried on without much mention of our loss. My wife, who had called Dad to get the recipe, tried to approximate the cornbread dressing the way Mom used to do it.

My sister whipped up pecan pies the way Mom had taught her, but – at least this time – she didn’t attempt the chocolate pie that’s famous around our hometown of McLean.
The games of Catch Phrase went on with three generations laughing around the kitchen table, but a voice was missing. The circle of 22 holding hands as Dad said grace was one short of normal.
But I suppose it wouldn’t be normal if everything stayed the same. We had a marriage in the family last summer, another one is coming up next summer, and a niece’s new boyfriend joined us in playing pool and taking out the trash. Another niece’s young husband, who only a couple of years ago was shy and finding his way in our family, seemed like he’d been with us for years.
The Ecclesiastes writer was right. “There is a time for everything, … a time to be born and a time to die, … a time to mourn and a time to dance…”
As much as I’d like things to stay the same, they don’t.
* * *
Keynote speaker Ken Starr’s words at the 25th Community Prayer Breakfast in Amarillo Nov. 25 were inspiring, but even more moving to me was the fact that believers from all over the city and area joined together at the event.
The choir represented high schools in every part of town. The audience included pastors and church members of every denomination. Custodians and cowboys shared scrambled eggs with insurance agents and college regents.
The 1,500 people were white, black and other colors, if you happened to notice. Race didn’t matter, because all were focused on their common Creator.
* * *
I wrote not long ago that I don’t pay much attention to contemporary Christian music on the radio. After a second Thanksgiving dinner with my wife’s family, our sister-in-law – who lives in Oklahoma – mentioned that between songs on K-Love, Jud Wilhite of Central Christian Church in Las Vegas is one of a few pastors who offer inspiring words on the national radio network.
Wilhite grew up in Amarillo and preaches at Hillside Christian Church when he’s in town. Maybe I’ll tune into K-Love more often.
* * *
My brother gave me a cool birthday present last month: a widow’s mite.
If that term sounds vaguely familiar, it’s the coin mentioned in Mark 12 and Luke 21. The King James version of the Bible reports a “poor widow” putting “two mites,” or small coins, into the temple treasury. Jesus said her offering was worth more than the larger amounts given by the wealthy.
My mite comes from the reign of Alexander Jannaeus of Judea, 103 to 76 B.C. Yes, it’s around 2,100 years old. Luckily for me, a lot of them were minted, so they aren’t worth that much money today and it was within the birthday spending limit.


But having something that was circulating the same time Jesus’ sandals were kicking up dust is more than cool. Things have changed in 2,100 years, but this coin remains, and it reminds me of the unchanging Christ.
Posted by Mike Haynes at 5:30 PM

By Mike Haynes
Joy Jordan-Lake may or may not have intended for feet to be symbolic, but they are kind of obvious on the covers of two of her books.
The paperback of her 2008 novel, “Blue Hole Back Home,” shows two sets of bare feet dangling down from a dock over a swimming hole. One set of feet and shins is shiny white, while the other is a little darker.
That photograph illustrates a theme of the book that is Amarillo College’s Common Reader this year, a story that won the 2009 Christy Award for best first novel. The Christy Awards go to books written from a Christian worldview, but don’t even think of “Blue Hole” as anything preachy. 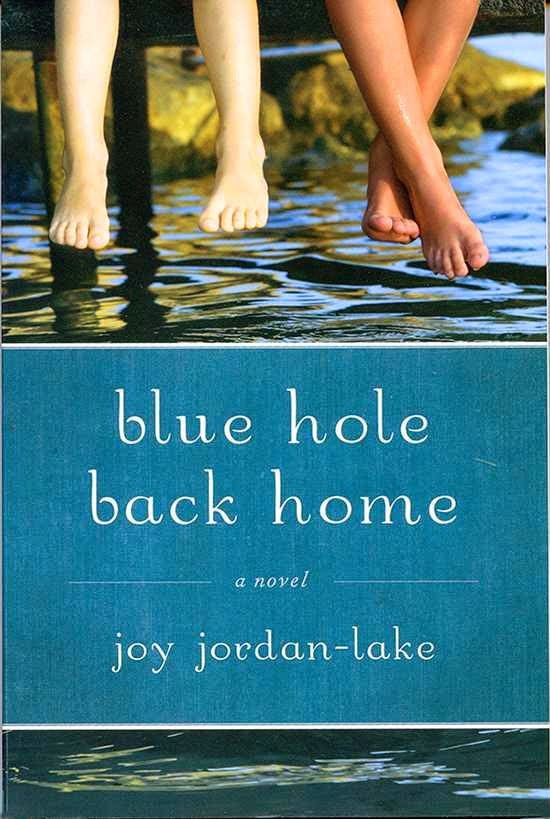 Like the teenage character Jimbo, who’s a preacher’s kid in the story, Jordan-Lake’s beautifully written work presents any spiritual concepts subtly. Jimbo is part of a handful of southern white teens who, some less reluctantly than others, welcome newcomer Farsanna into their group of friends in the summer of 1979.
Farsanna, whose skin is darker than theirs, has moved to their rural community with her family from Sri Lanka.
Showing his church background – as Jordan-Lake reveals her own – Jimbo says things like, “Gotta go barefoot on holy ground,” when the teens make their first visit with Farsanna to their beloved swimming hole, the Blue Hole of the title.
Beyond throwaway lines like that, Jimbo hints at real spiritual insight with comments such as “Ain’t none of us harmless.” I suspect Jimbo had heard his dad preach on Romans 3:23.
The book, based on various real incidents in the author’s growing-up time in the South, makes it clear that racial hatred still was flaring up in the late 1970s, years after civil rights supposedly had been achieved. The word “Ferguson” reminds us that there still are lessons we haven’t learned. 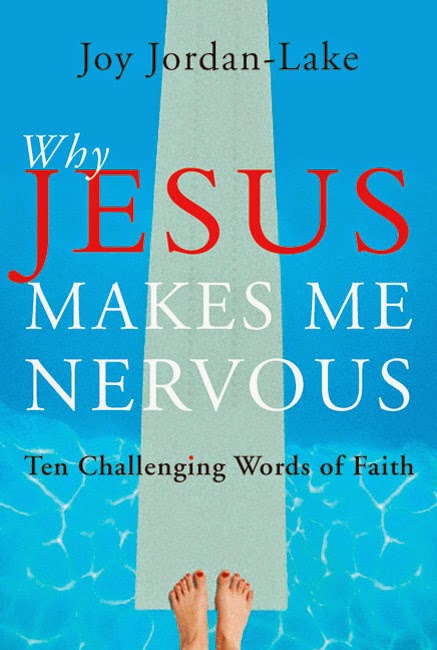 The main character is Shelby Lenoir, nicknamed Turtle, a tomboyish girl who first invites Farsanna into the back of the group’s pickup. Turtle has genuine empathy for “the new girl” but admits to herself that she hesitates to get involved when some nasty things happen.
In Jordan-Lake’s other book with feet on the cover, she also admits that she likes to avoid conflict.
“Why Jesus Makes Me Nervous” was published in 2007. Its cover shows two feet with red nail polish, their toes on the end of a diving board. In a personal, again skillfully written book, Jordan-Lake digs into “Ten Alarming Words of Faith” that Christians throw back and forth every day but that might require more of us than we want to acknowledge.
She writes, “This book attempts to explore just how uncomfortable Jesus can make things.”
For each of the concepts – “resurrection,” “peace,” “worship,” “hope” and more – she uses her own experiences to illustrate how Christianity requires more than nice words; it means getting your hands dirty and helping people.
Jordan-Lake’s background gives her a rich trove of knowledge and experience to write about. She grew up in Tennessee and worked in Boston. She has a seminary degree and a doctorate in English literature. She has talked about writing at a C.S. Lewis seminar in England and to the Panhandle Professional Writers in Amarillo.
At 6 p.m. Monday (Nov. 10), she will discuss the creative process in the College Union Building on AC’s Washington Street Campus, and at 7 p.m. Tuesday (Nov. 11), she will talk about “Moral Courage,” AC’s theme for this year, at the Globe-News Center for the Performing Arts. Both events are free and open to the public.
Moral courage certainly is at the forefront of “Blue Hole Back Home” as young people cope with prejudice, from a high school kid spitting tobacco juice at the new girl’s feet to adults donning white cloaks and hoods. Jordan-Lake manages to weave in wisdom from the 1600s – John Donne’s poetry – to the 1960s – the Beatles: “I was alone, I took a ride, I didn’t know what I would find there.”


That lyric certainly fits the teenage Turtle, and Jordan-Lake’s writing inspires us to put our feet on the ground and follow Jesus’ example.
Posted by Mike Haynes at 3:40 PM
Newer Posts Older Posts Home
Subscribe to: Posts (Atom)