Learn from Billy Graham how to slow down with grace

By Mike Haynes
My mother was not comfortable getting old. By the time she was 83, deteriorating health had forced her to slow down from the constant multitasking she had been used to for more than six decades.
Raising five kids, nonstop cooking, playing the church organ and hosting bridge club were just a few of the activities that kept this ranch woman busy, so Joyce Haynes was reluctant to spend increasing hours in a living room recliner during 2013, the last year of her life.
Talking to her Methodist pastor nephew, Thacker, helped her adjust to the new normal. And a book on a table next to her chair was another encouragement. It was “Nearing Home,” by Billy Graham. 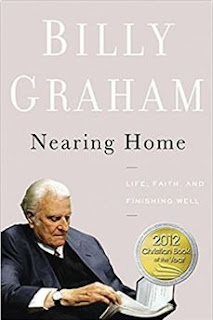 Subtitled, “Life, Faith, and Finishing Well,” the evangelist’s 2011 book was one of his last and was timely for Mom. I believe she took to heart Graham’s advice that “Growing older with grace is possible for all who will set their hearts and minds on the Giver of grace, the Lord Jesus Christ.”
Mom said she hoped her children would read “Nearing Home.” I haven’t yet, but I sure did benefit from the renewed attention to Graham after his death this Feb. 21 at age 99. Like many, I read about his life online, in newspapers and magazines, watched a TV special on his career and listened to his sermons on satellite radio. I was reminded of something I, along with my family, have seen since the 1950s: that this man was an admirable Christian example.
One of those replayed sermons was from September 1975 at Texas Tech’s Jones Stadium in Lubbock. It was the second time I’d heard it, because I attended several of the eight nights of the West Texas Billy Graham Crusade that year. It was just one of many ways this man of God touched me.
Still burned into my memory are the brilliant stadium lights that seemed to turn the green-turfed home of the Red Raiders into two acres of heaven. As Graham preached on topics such as “Angels,” “Jaws” (the movie came out that summer) and “The Cost of Not Following Jesus,” he was backed up by sports figures (Tech and Baylor football coaches Steve Sloan and Grant Teaff and Oklahoma quarterback Steve Davis), singers (Ethel Waters, Beverly Terrell and Norma Zimmer) and others.
And of course, Graham’s longtime team members Cliff Barrows and George Beverly Shea were ever-present.
I lived in Lubbock then, working at the Avalanche-Journal newspaper, where one of my jobs was placing Graham’s regular “My Answer” column on a page. I didn’t know that a girl named Kathy rode down from Amarillo in a bus with her Paramount Terrace Christian Church youth group to see Billy Graham. She was impressed with the size of the audience, which ranged from 20,000 to 30,000 each night in the then-47,000-seat stadium. Fifteen years later, I met Kathy at that same church and married her in 1991.

Graham has inspired me since the black-and-white TV days. My brother, David, remembers watching the crusades with our grandmother after color came along. In high school, my friend Alan signed me up for a free subscription to “Decision,” the magazine of the Billy Graham Evangelistic Association. That eventually led to my attending the Decision School of Christian Writing in Minnesota in 1979, where I toured the BGEA headquarters and heard now-famous author Philip Yancey speak about the need for more quality in Christian writing.
In 2000, I nervously did a phone interview with Franklin Graham in advance of Amarillo’s Franklin Graham Festival as the Graham son was beginning to fill his father’s role. I wrote about spiritual issues for this newspaper and for the Canyon publication, “Upbeat Reporter,” but what sticks in my mind is Franklin pointing out the difference between Texas and North Carolina barbecue.
One of the few magazines I still subscribe to is the intelligent and insightful “Christianity Today,” founded by Billy Graham.
If “America’s preacher” has had such influence on me and my family, how many others around the world have been attracted to Jesus by this man who stuck to one message, the gospel of Christ?
Upon Graham’s death, Lubbock pastor Mitch Wilson told Ray Westbrook of the Avalanche-Journal he also had attended the 1975 crusade.
“I was just overwhelmed with those simple, clear, concise words of truth that drew me in,” Wilson recalled.
Like my mother, Billy Graham finally had to slow down. And like her, he finished well.
* * *
Mike Haynes taught journalism at Amarillo College from 1991 to 2016. He can be reached at haynescolumn@gmail.com. Go to www.haynescolumn.blogspot.com for other recent columns.