By Mike Haynes
Sometimes a class can affect you beyond the grade you make, and today (April 25, 2015) the Texas History course I took in fall 1971 is resulting in my driving to Pampa.
Dr. Ernest Wallace assigned us to write a book report in that Texas Tech University class. I chose “Ranald S. Mackenzie on the Texas Frontier” for two reasons: (1) Dr. Wallace was the author and (2) it was the shortest book on the list he gave us.
Little did I know that Chapter 5 of the book about Col. Mackenzie’s exploits described a battle that took place a few miles from the house where I grew up – and possibly on my family’s ranch.
In the half-hour Battle of the North Fork of the Red River on Sept. 29, 1872, the Fourth 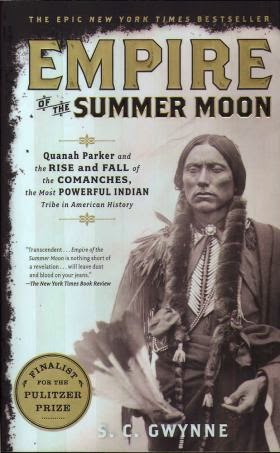 Cavalry attacked a 262-tepee village of Chief Mow-Way, killing 52 Comanche Indians while losing four soldiers. Wallace wrote that the event in current Gray County “was not only Mackenzie’s greatest in a long career of Indian warfare but it also stands as one of the major Anglo-American triumphs over the Indians on the Southern Plains.”

Inspired by the location of the attack, my grandfather, John C. Haynes, and I got two historical markers placed on highways between McLean and Lefors in 1972, a century after the battle. Dr. Wallace composed the inscription.
Today, another historian who wrote a chapter on the battle will be at the First National Bank building in Pampa for a 6 p.m. program and 7:30 p.m. book signing hosted by the White Deer Land Museum. S.C. Gwynne of Austin will talk about his 2010 book, “Empire of the Summer Moon: Quanah Parker and the Rise and Fall of the Comanches, the Most Powerful Indian Tribe in American History.”
Gwynne lives in Austin, where he has been a writer and editor for Texas Monthly magazine. He wrote 2014’s “Rebel Yell,” about Civil War Gen. Stonewall Jackson, and is working on a book about college football.
He also is scheduled to speak at 7 p.m. May 4 at Amarillo’s Globe-News Center for the Performing Arts, sponsored by the Amarillo Public Library.
Chapter 17 of Gwynne’s Comanche book covers that same North Fork battle, although his volume, a Pulitzer Prize finalist, is more wide-ranging – thematically and geographically – than that of Wallace, who died in 1985.
Gwynne says the various branches of the Comanche people were the main reason the Spanish and French halted their expansion into the New World and why the American West remained dangerous for Anglo settlers until the late 1870s. Comanche horsemen were considered the best in the world, and their response to Anglo trespassing on their tribal lands was vicious, as the author details.
Most of us are more empathetic today to the native tribes’ loss of their land and heritage to the Manifest Destiny of the white population, and in this region we certainly place Quanah Parker on a pedestal based on his leadership after the 1874-75 Red River War that finally restricted the Indians to reservations. But I have to admit that Gwynne’s description of Comanche atrocities leaves me with little sympathy for those native warriors.
Unlike the more peaceful southwestern tribes who were evangelized by Spanish priests, the Comanches allowed few outsiders onto the Plains, much less any effective influence of the Christian church. The most celebrated Protestant settlement in the Texas Panhandle was Clarendon, settled by Methodist minister the Rev. L.H. Carhart in 1878. The establishment of that Christian colony was possible only because the Comanches had been confined to such reservations as Fort Still, Okla.
In Europe, Christianity has been around since St. Paul preached in Rome in the first century. In our Panhandle-Plains region, a completely different culture reigned until just 140 years ago. The current Bible Belt was the southern tip of a Comanche empire, visible now only in museums, in the giant steel arrows recently erected to mark the Quanah Parker Trail and in real arrowheads dug up in pastures and cotton fields.
However unfair, that battle near my home was the beginning of the end for a powerful American society. It led to Charles Goodnight bringing cattle to the Panhandle in 1876, white settlements from Mobeetie to Tascosa and the planting of churches across the plains.
Hearing S.C. Gwynne today might put a new perspective on how we got here.
* * *


Mike Haynes teaches journalism at Amarillo College. He can be reached at AC, the Amarillo Globe-News or haynescolumn@hotmail.com. Go to www.haynescolumn.blogspot.com for other recent columns.