By Mike Haynes
“You’re pretty good – for a girl.”
Before the USA women thrilled the nation with their 2015 World Cup championship, that’s one of the backhanded compliments one of the American soccer stars said she wanted to put to rest.
My sister played college basketball at the highest level and may be more talented than her four brothers, so I’ve never had that attitude about female athletes. And except for some hardcore male chauvinists, I think those paying attention were convinced of the USA women’s soccer skill by the 5-2 finals victory over Japan.
I’m afraid I have to use one of those backhanded remarks, though, to describe the movie, “Faith of Our Fathers.” It’s pretty good – for a Christian film. 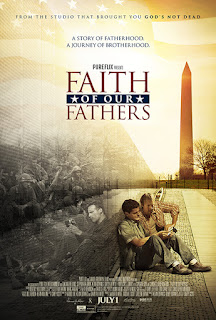 Over the years, I’ve followed the advance of widely distributed movies that promote a biblical message, and the quality has improved. (Not that you could improve on the message.)
In general, the acting has progressed. Some Christian movies have featured “name” performers such as Patricia Heaton in “Moms’ Night Out” and Greg Kinnear in “Heaven Is For Real.”
Sometimes the writing is better, and upgraded production values are evident in some films. Of course, the amount of money available to the producers usually dictates the quality of cinematography and sound and whether a sequence looks real or fake.
I hope lots of people see “Faith of Our Fathers,” because it presents the good news of Christianity in a way that could touch certain hearts that need to understand it. The story follows John Paul, a yuppie Christian, traveling with Wayne, an unbelieving backwoods hick, as they drive toward Washington, D.C., to find their fathers’ names on the Vietnam Wall.
In flashbacks, we see their dads, under stressful battlefield conditions, discussing life and matters of faith.
The well-known actor in this one is Stephen Baldwin, one of the celebrity brothers, who recently has focused on Christian films. He’s believable as an Army sergeant, and the lesser known actors also give credible performances, unlike in some previous faith films that used inexperienced church members in key roles.
Kevin Downes, one of the writers and producers, plays John Paul as a slightly nerdy husband-to-be who is serious about his faith. Downes is in this because of the message, but he’s not a bad actor, either.
Christian audiences might recognize Rebecca St. James, the Australian singer who has performed in Amarillo, but her part is short, and she seems inserted into the story just to get her name into the credits. The same goes for “Duck Dynasty” guy Si Robertson.
David A.R. White, who plays Wayne, offers some moving moments but in other scenes overacts, giving us a redneck stereotype we’d expect to see in “Hee Haw.”
My wife, mother-in-law and I enjoyed the movie and thoroughly endorse the good news that’s made clear: that humans are sinful, we need forgiveness, and if we believe that Jesus died for our sins and rose from the dead, he will redeem us for eternity.
But Christian films made specifically to spread that message still have a ways to go. This one has too many “convenient” occurrences, such as a character from the Vietnam War suddenly showing up in the current day, and dialogue – especially in a convenience store – that sometimes is a little too silly.
We did like one recurring joke, a Beatles reference. (There’s a hint about it a few paragraphs back.) And I believe Christ-themed movies are headed in the right direction.
Years ago in this space, I paraphrased author Philip Yancey: “Artists must inject into our culture not only a good message, but a message presented in such a creative way that the public will be enticed to notice.”